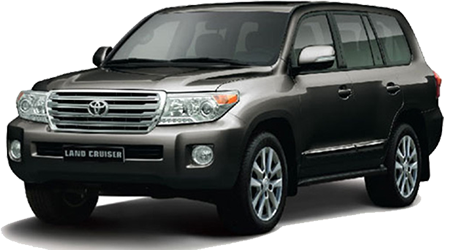 Everyone loves the 2016 Toyota Land Cruiser, and so will you when you see it in person at Vann York Toyota in High Point, NC, one of the most trusted dealerships in the Southeast. Speaking of trust, do you realize that America has trusted the Toyota Land Cruiser since 1957 when it was first introduced as a hardcore off-road vehicle? That’s a long time ago…Eisenhower was in the White House, Elvis was in Graceland, and Toyota’s groundbreaking all-wheel-drive Land Cruiser was in America’s garages. Vann York Toyota hasn’t been around quite that long, but our track record serving Greensboro, Winston-Salem, Kernersville, Jamestown, Thomasville, Lexington, Asheboro, and Burlington, NC, is impeccable, and our top-rated customer service has help build lifelong relationships with our customers. Come visit our cool new showroom at 500 Eastchester Drive in High Point, and we’ll show you why the Land Cruiser is a worldwide favorite and the gold standard in 4-wheel-drive SUVs.

New Features of the 2016 Land Cruiser

Other car manufacturers have been struggling to catch-up to the Land Cruiser, but they can’t because Toyota has consistently re-designed and upgraded its flagship SUV for almost 60 years. We’re proud to announce that the 2016 model is no exception with refinements worthy of this ultimate-capability machine. On the outside, you cannot help but notice the refreshed hood with sheet metal highlighting the front clip. The hood has a scooped design with meaty power bulges, and the grille is to-die-for. At night, the 2016 Toyota Land Cruiser dazzles the roadway with projector-beam LED headlights (both high- and low- beam) and keeps it dazzling on the flip-flop with new light-tube taillights and LED brake lights. Even from the side, the Land Cruiser looks like a million dollars with added chrome molding and a distinctive Land Cruiser logo. Inside, you’ll marvel at the sleek new dashboard featuring a large high-resolution touch-screen display and updated controls. In the back, you’ll find the cargo capacity so huge (81.7 cubic feet) that’ll you’ll swear you can hear an echo. Throw in a four-zone automatic climate system, a rear-seat DVD entertainment system, and a leather-trimmed and heated steering wheel, and you will be ensconced in limousine-level luxury. Under the hood, you’ll be pleased to see a fearless 32-valve V8 engine in a double overhead cam configuration that pushes out a whopping 381 hp and 401 pound-feet of torque. Now look closer. There’s a whole lot of technology boosting that unrivaled power: Dual Independent Variable Valve Timing and Acoustic Control Induction maximize rpm and takes acceleration to new heights. If that sounds too technical, think of it this way: The all- Toyota Land Cruiser has plenty of oomph.

Safety Features of the 2016 Land Cruiser

As usual, Toyota places a premium on safety and the 2016 Land Cruiser is like a fortress on wheels with the pioneering Toyota Safety Sense Package that includes a Pre-Collision System with Pedestrian Detection, Lane Departure Alert, Auto High Beams and Dynamic Radar Cruise Control (DRCC) to act as your infallible co-pilot. Other advances that help make the Land Cruiser one of the safest SUVs on the road are:

Off-Road Capabilities of the 2016 Land Cruiser

While driving on the highway is certainly perilous, driving off-road is fraught with additional dangers, which is why Toyota had gifted the new Land Cruiser with a Multi-terrain Monitor that displays front, rear and side camera views on a 9-inch navigation screen. It heightens awareness of what’s going on all around your vehicle, and awareness is Job One for traffic safety. New for 2016 is the Land Cruiser upgraded drivetrain with a limited-slip differential that automatically directs more traction to the wheel with the greatest traction. Take that, rugged terrain!

The Toyota Land Cruiser has evolved from a lovable off-road warrior to one of Toyota’s most luxurious SUVs, without sacrificing any of its off-road capabilities. Whatever the other carmakers come up with, the Land Cruiser can say, “Been there, done that.” If you want to experience the rugged but classy SUV that started it all, come on down to Vann York Toyota at 500 Eastchester Drive in High Point, NC, for a test drive. Heck, we’ll even let you kick the tires if you like. Don’t hesitate to visit us from Greensboro, Winston-Salem, Kernersville, Jamestown, Thomasville, Lexington, Asheboro, and Burlington, NC, because our customers become friends for life. We’re right here in the heart of High Point, where the rubber meets the off-road.